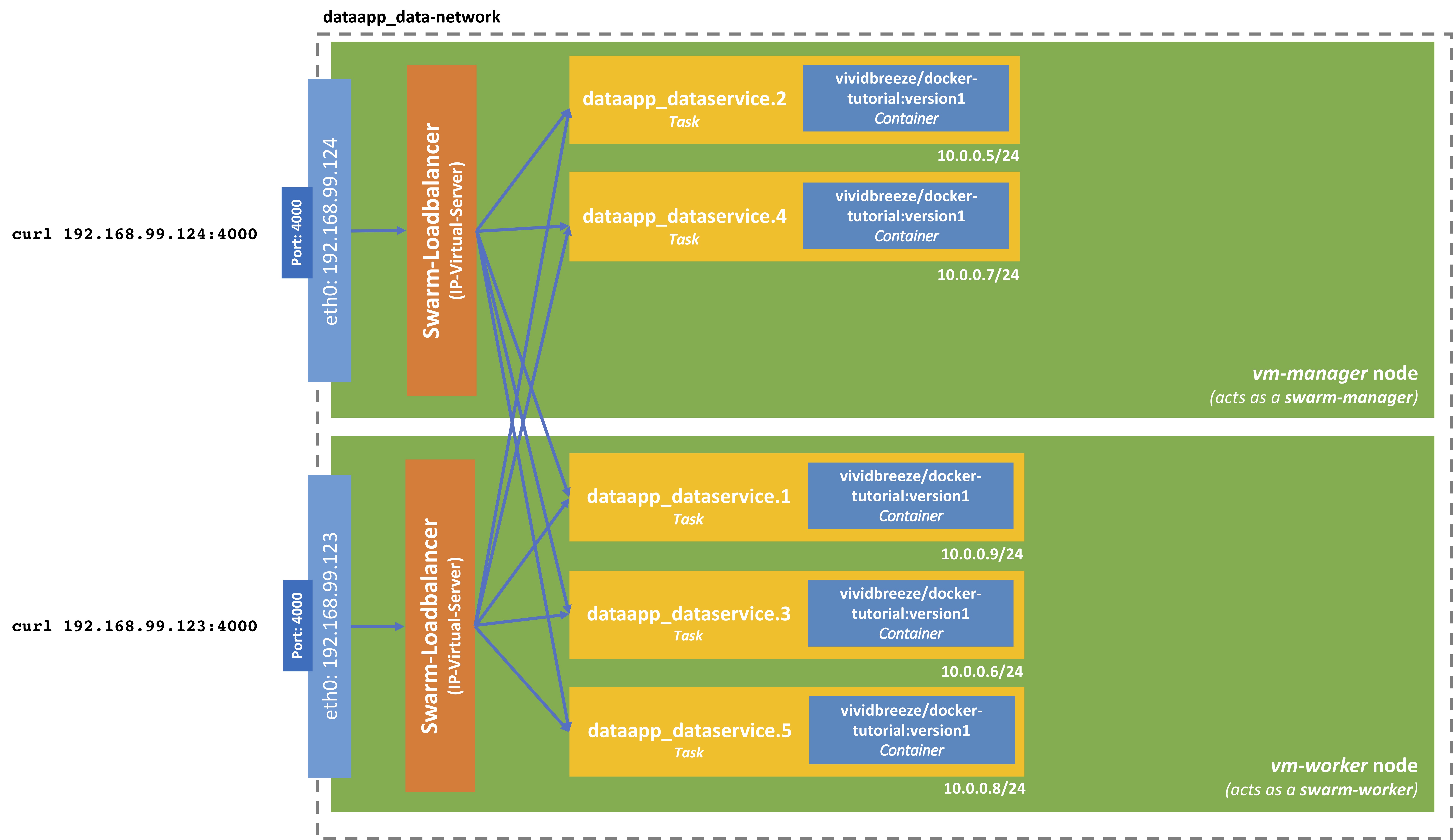 As we have seen in the tutorial about Docker swarm, the IP addresses of our services can change, e.g. every time we deploy new services to a swarm or containers are restarted or newly created by the swarm-manager etc. So services better address other services by using their name instead of their IP-address.

Please set-up the example from Docker Swarm Tutorial before we deploy our service:

If a container joins a swarm, two networks are created on the host the container runs on

You can specify a user-defined overlay network in the docker-compose.yml. We haven’t done this so far, so Docker creates one for use with the name of the service and an extension, in this case, dataservice_default.

Let us verify which containers belong to our network dataservice_default.

In the Containers-section of the REST response, you will see three containers that belong to the dataservice_default network, the two containers above, as well as a default-endpoint. You can verify vm-worker1 on your own.

We added a database service (a Redis in-memory data storage service). In addition, we defined a network (data-network) and added both services to this network. You will also see a constraint for the Redis service, which defines that it should only run on the vm-manager. Now let us deploy our altered service

As expected, the new network (dataapp_data-network) and the new service (dataapp_redis) were created, our existing service was updated.

The network is listed in our list of available networks (notice that the dataapp_default network still exists. As we don’t need it anymore and can delete it with

Let us now log into our containers and see if we could ping the other containers using their name. First get a list of containers on vm-worker1 (the container ids are sufficient here)

Now let us execute a ping to the service dataservice and to the redisservice that runs on the vm-manager from one of these containers.

In both cases, the services should be reached

We can reach our webservice from both(!) machines

It doesn’t matter if the machine is a manager-node or a worker-mode. Why is this so?

Earlier, I mentioned the so-called ingress network or ingress filtering. This network receives a service request and routes it to the corresponding task. The load-balancing is present on each node and uses the IP virtual server from the Linux kernel. This load-balancer is stateless and routes packages on the TCP-Layer.

Internally the containers communicate via a virtual IP. The beauty here is that if one container/task crashes, the other containers won’t notice, as they communicate with each other via the Virtual IP.

You can find this virtual IP by using

Of course, every container can also connect to the outside world. In inherits the DNS settings from the Docker daemon (/etc/hosts and /etc/resolv.conf).

The name service provided by Docker only works within the Docker space, e.g. within a Docker swarm, between containers. From outside of a container, you can’t reference the services by their name. Often this isn’t necessary and even not desired for security reasons (like the Redis datastore in our example). Here you might want to have a closer look at Zookeeper or Consul or similar tools.

However, if you have applications running with many services running, you might consider Docker management tools, such as Portainer, Docker ToolBox, or Dockstation.